A Different Kind of Debut

Well, it’s offiicial.  This former half-miler who never ran over a six-mile long run in college or an eight-miler post-collegiately is runnin

g a half-marathon.  The Rock ‘n’ Roll Savannah Half to be exact.  Can you believe it?  Neither can I.  Especially given the fact that just over three months ago, I could barely run one-mile due to a hamstring injury that kept me sidelined for close to two-months.  Finally in August I could run two – three miles a few times a week without too much pain. 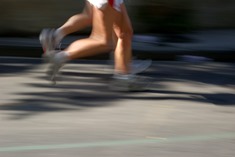 I still haven’t done any speed and won’t going into this race; but Sunday I ran an eight mile long run.  I know!!  Eight miles for me is like…torture.  To make things worse, I chose a new route that turned out to be way too hilly, but I successfully finished.  Luckily the Savannah course is flat.  So can I tack on 5.1 miles onto that distance?  I hope so.  My race is on November 9th, so I’ve got three-ish weeks to get there.  My goal:

To slap this baby on the back of the Black Ninja!

Yup – I simply want to finish the darned thing so I can put a freakin’ magnet on my FJ Cruiser (aka The Black Ninja).  The back is going to look great with the 13.1 sticker on it!

Okay fine – I guess I shouldn’t be that car vain.  I actually do want to come away with a decent time for my debut half marathon.  I am not even going to post what time I’m shooting for, but after the race I’ll spill all the deets.  Perhaps I should have a guess my finishing time contest – that might be kind of fun.

Well – gotta run!!  Happy Wednesday, or as all the young people in my life like to say, “Happy Hump Day!”

1 thought on “A Different Kind of Debut”