It’s very hard in the beginning to understand that the whole idea is not to beat the other runners. Eventually you learn that the competition is against the little voice inside you that wants you to quit.
~ Dr. George Sheehan

So about six months ago I was talked into doing this half marathon thing.  Now I can’t believe it’s almost here!!  My daughter asked if I was nervous and 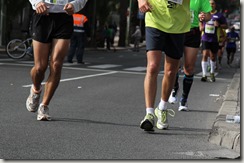 I had to admit, I do have butterflies swirling around in my belly when I start thinking about the race.  I am by no means going to set any records other than my own personal best at a distance I’ve never run, but I still feel the nervous anticipation of toeing the line with hopes and goals in mind.  Like I want to run under a certain time, but overwhelmingly, I just want to finish the darned thing.  13.1 miles is crazy long for a former 400/800 meter runner!

I think I’ll always be a competitor at heart and one of the reasons why I love running is that even if you aren’t “competing” with other people, you are always competing against your self.