I am a huge professional cycling fan and watch cycling every chance I can get.  In fact, my latest young adult novel features a cyclist on a junior developmental squad.  But back to the blog… Women’s cycling isn’t featured as much as men’s cycling on television, so I was super excited that TourTracker was broadcasting the women’s race at the US Pro Cycling National Championships.  On Memorial Day, I tuned in to watch the action go down.  And I was not disappointed.

I witnessed history when Alison Powers of the UnitedHealthcare’s Pro Cycling Team became the first woman, errr first US professional cyclist EVER (man or woman) to hold three 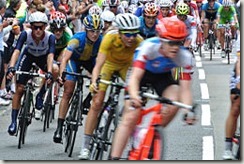 national US Cycling titles simultaneously.  For you non-cycling fans – there are three road cycling disciplines: