Today the French commemorate the storming of the Bastille and the start of the French Revolution with La Fête Nationale, or what those of us in America call Bastille Day.  My first visit to Paris missed La Fête Nationale by a week, which I’m still kind of bummed about because from what I hear, it’s quite the party that starts off in the morning with a military parade on the Champs-Elysées and the evening is capped off with a massive fireworks display. 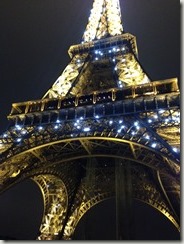 Sadly, I’m not spending July 14th in Paris, but I have been researching how some cities and towns around the US celebrate Bastille Day.  Milwaukee seems to have one of the largest events called Bastille Days – a three day event that kicks off with a 5K run/walk called Storm the Bastille.  New Orleans is also another big event where they have a block party in the Faubourg St. John neighborhood.

My latest project is a young adult novel set in the fictional Barrineaux, North Carolina – a small lakeside village with a very prominent French influence.  So much so, the town hosts a huge Bastille Day Fête every July.  The weekend festival attracts lots of tourists and features the typical parade, fireworks and block party.  But it also hosts a bicycle race that plays a major role in the story, being the hero in the story is a cyclist. Which leads me to another fun Bastille Day activity… Watching the Tour de France.

rider Tony Gallopin (Lotto Belisol) wore yellow today, but sadly lost the jersey to Vincenzo Nibali. Overall it was a tough mountain stage with lots of surprises, most notably the crash by GC favorite Alberto Contador, who had to abandon the Tour with a fractured tibia. Cycling is so freakin’ dangerous!!  Tomorrow is a rest day and the boys will back to the action on Wednesday for Stage 11.  Happy Bastille Day everyone!!